Leadership: often written about, exhaustively researched, frequently debated, universally practised, and always required. But there is not a universally applicable handbook, and all too often, people are promoted to leadership positions without being adequately prepared.

Fortunately, many of those promoted are very capable and learn the art of leading ‘on the job’. But why is it there is no handbook, and yet some people rapidly rise to the challenge?

In thinking this through, I have used my own experience of working for some great leaders and coaching leaders who have made a real difference in their way of working.

Perhaps it is this complexity that challenges the viability of a definitive leadership handbook while the simplicity of the way forward means it is not surprising that capable people learn on the job.

The critical source of complexity is arguably within the leader him or herself. We are our genome, and no two people think or respond in precisely the same way. The leader’s character and emotions are part of the complexity equation (I will not attempt any mathematical modelling!).

Other sources of complexity include the company’s composition, its trading or business requirements, political landscape, stakeholders etc. And to top them all is yet another layer of complexity – the interactions between all these sources of complexity. Not surprisingly, therefore, we always seek clear thinking leaders who can bring simplicity to these challenges.

When I started leadership coaching, I was fortunate to have as a first client a successful highflying executive. She was destined to reach the main board of a global organisation, but she knew she had a major challenge ahead of her.

“I am my own biggest problem,” she told me. She knew she had to change. She understood the power and fundamental requirements of self-awareness.

She recognised that the way others perceived her was not how she saw herself and was not the way she was going to succeed. She wanted to find new behaviours.

Once she agreed to her own personal and highly specific change plan, based on her improved self-awareness, her progress accelerated and was noticed at board level, and she eventually joined the board. The change was so fundamental that both her daughter and husband sent me thank you messages.

This process was an exercise in attaining a deep understanding of oneself, which is always the first step to take, as, without self-awareness, you are building on shaky foundations.

Worryingly, most leaders score 5.5 on a scale of 1 to 10 in self-awareness according to a study on ebwglobal.com. This means that half the time, individuals around the leader see the leader in quite a different way from the leader’s self-perception.

How much more effective would those leaders be if they adapted their views of self or adapted their behaviours? Are they walking the talk? Do they truly have influence? Do they understand empathy?

Why is this important? Because you need that solid foundation on which to adapt your behaviour and lead others through unpredictable changes in the business environment and organisational imperatives.

Take for example the findings of the survey of desirable traits in leaders, produced in the Global Leadership Report by Mining Journal Intelligence in partnership with Swann Global. The results provide useful insight, but how can the individuals respond and capitalise on the results and adapt their behaviours if they are not aware of where they start from? No one follows a leader who does not inspire confidence. The leader must be credible.

A young management accountant was promoted to general manager of a factory, with the simple assignment: Turn it around! While he was capable and not afraid of the challenge, which needed leadership from the front, he was seen as an accountant rather than a leader and needed to prove himself.

He decided to take a command leadership style for six months, frequently visible on the shop floor, running shift changes himself, making sure he was one step ahead of the line supervisors, being very decisive, and less empathetic.

Once he felt accepted, he shifted his style to a collaborative approach; more listening,

empathetic, and adaptable. He understood he needed to be credible in the eyes of the workforce, and clearly, that assessment would come from them and not from him. He could make those changes because he was willing to look at himself through the eyes of his workforce and adapt his behaviours according to what they needed to see.

Of course, leadership is also about teams, building the self-awareness and required behaviours that are a prerequisite to contributing to the team’s shared objectives.

The local middle management team of an Asian gold mine had to step up to increased responsibilities when COVID-19 prevented the ex-pat management from flying in to be onsite. We took these middle managers through a programme identifying and supporting their individual behaviours required to meet their new responsibilities. Their success in developing their leadership skills resulted in a doubling of monthly profits within six months.

I consider myself fortunate to be in the business of coaching and helping others. I find an effective approach is almost a mantra. Get to know yourself, and don’t shy away from any of your traits.

Remember, weaknesses become strengths in different circumstances. If you are clear about what is required of you, you will find an effective roadmap through all the complexities and uncertainties we all face.

More importantly, others will be willing to follow your lead, and you will be mentoring the next generation of leaders.

This article first appeared in the Global Leadership Report 2021, produced by Mining Journal Intelligence in partnership with Swann Global. 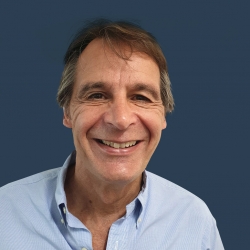 As Managing Director of Skein, Tom provides advice on driving change behaviours. His experience ranges from divisional CEO for a FTSE 100 company to Partner at large change management consultancies.